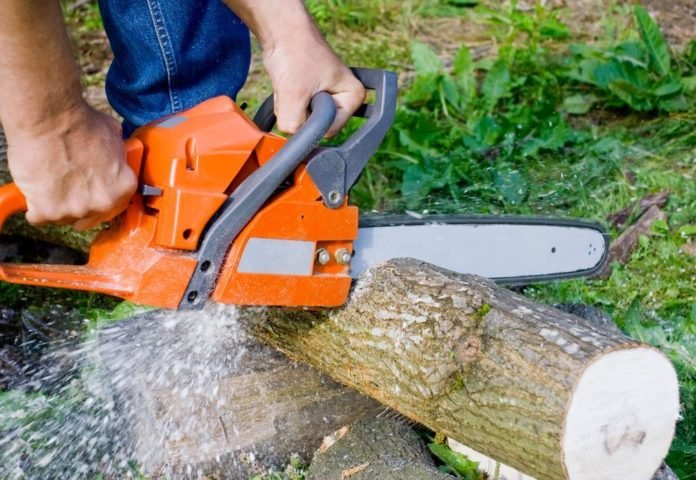 An electric chainsaw has an easy push button that starts the motor and saw immediately. A cordless version runs on battery and lasts for an hour before needing a recharge. Many electric models have advanced user controls, large display screens and built-in LED lights that light up at night.

What to Use for

Use electric chainsaws for gardening and landscaping, such as tree trimming and cutting. The lightweight device is very portable and used for small projects around the home. It emits minimal noise, making it appropriate to use near schools and homes. However, an electric chainsaw is not suitable for cutting large trees.

Electric chainsaws are dangerous when used incorrectly. This includes using a saw on trees that are too big for its size and strength. Like any device that runs on electricity, there is the risk of electrocution through a broken cord or if the device is placed in water. A spark from a damaged saw can start a fire.

Gas-powered chainsaws have existed for a few decades longer than electric ones, but the electric ones are considered to be safer, lighter in weight, more portable and easier to use. Most people prefer to use electric devices because it’s as simple as plugging in a cord and the motor starts automatically and runs as long as there’s electricity. There are more sizes and features to choose from when you buy electric. The components do not emit toxic gases or liquids like gas-powered devices do. Using electricity is more environmentally friendly and sustainable in the future.

Electric chainsaws have a few disadvantages, which include smaller parts and reduced amounts of power. Gas chainsaws are more powerful and have a wider range of use. However, the gas models are more expensive, costing at least $100 more than the electric ones. The look and feel of chainsaws, which all used to be loud and heavy, have changed for the better.

Now, you have lighter, more advanced versions that are powered automatically instead of manually.